3. What are the benefits of SD WAN?

4. Where has SD WAN come from?

6. SD WAN is an overlay. You still need an underlay!

8. What problems does SD WAN create?

9. What is a Hybrid Network (and why might I want one)?

What is SD WAN & what does it mean to me?

SD WAN refers to the use of software to implement and manage the Wide Area Network, including virtualisation of routers and firewalls (NFV) and techniques to orchestrate the network centrally. The concept is similar to how SDN implements virtualisation within the data centre.  SD WAN promises many benefits.  One aim is to simplify the management of the WAN. Another is to make it more flexible so that, for example, traffic can be offloaded from MPLS to the internet. This in turn can save cost.  SD WAN is deployed as an overlay on top of an underlying infrastructure of  technologies such as MPLS and Internet.

As with any emerging trend the definition of SD WAN is wide and varied. A multitude of new and existing  vendors and carriers are looking to promote a version which fits their own capabilities, both now and in the future.

This has led to confusion as to whether an SD WAN solution includes the underlying connectivity as well as the router and the management. That’s an important distinction for Medium Sized Businesses who tend not to have large IT teams who would run SD WAN themselves. Different suppliers define it differently.

It is worth keeping in mind the distinction between an SD WAN CPE solution and a complete SD WAN solution that also includes the underlying connectivity. 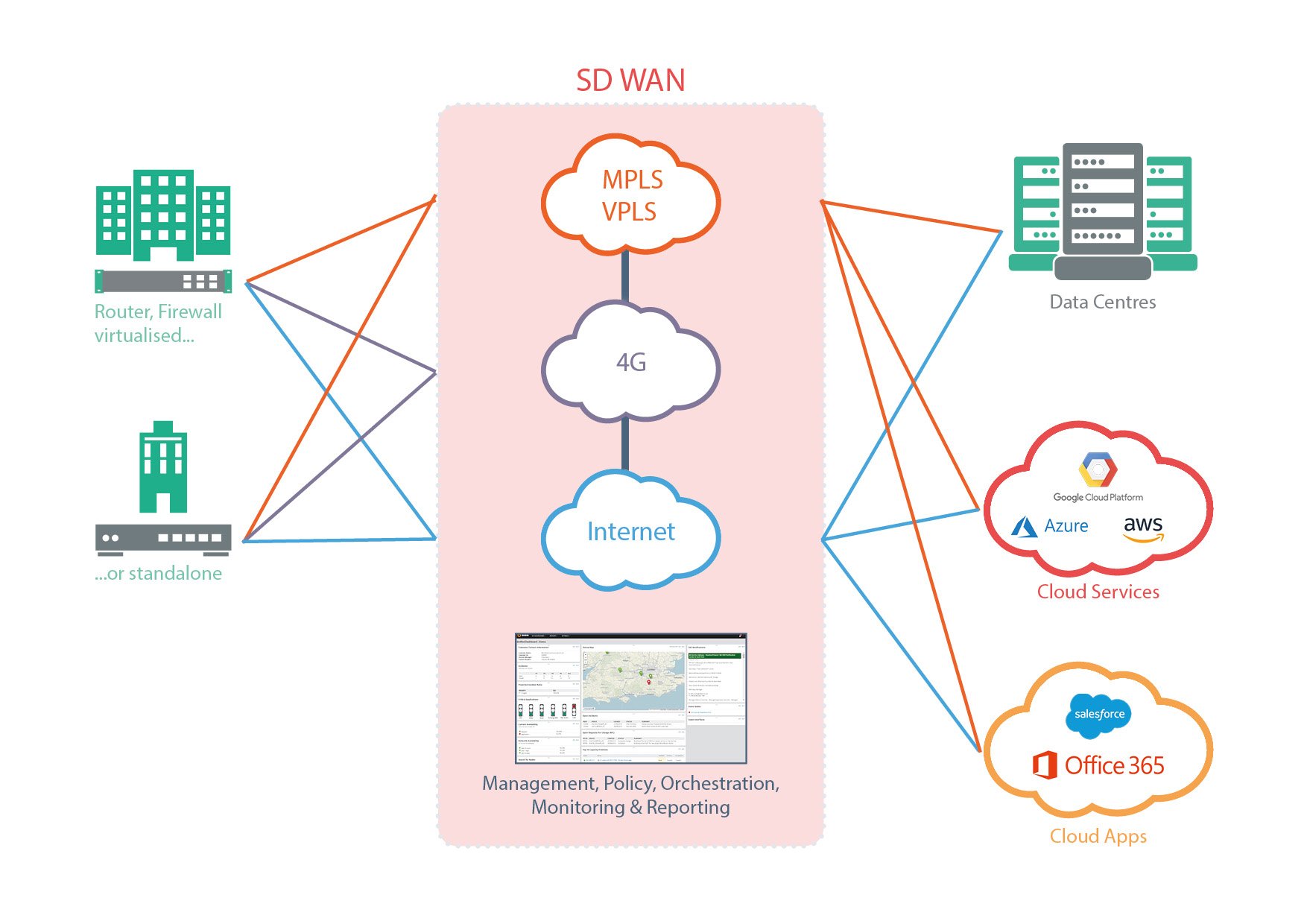 In the diagram above we can see an HQ and branch office connecting to an MPLS or VPLS WAN, as well as to the Internet. SD WAN manages rather than replaces this connectivity.

It's worth noting, in passing, the 4G cloud within the diagram.  Businesses increasingly connect their sites over 4G for Rapid Site Deployment, temporary sites, backup and DR.  The ability of SD WAN to choose paths dynamically is very helpful with multiple network technologies available.

Also note that  as businesses digitalise more of their processes, the performance of their applications over the network becomes increasingly important. Thus, comprehensive monitoring of the full IP path is now becoming more critical, especially when offloading some of your traffic to the internet. SD WAN can help here, although it will be focussed on the network and probably won't cover your applications and on-site infrastructure.  For the full IP path you will probably still need network monitoring.